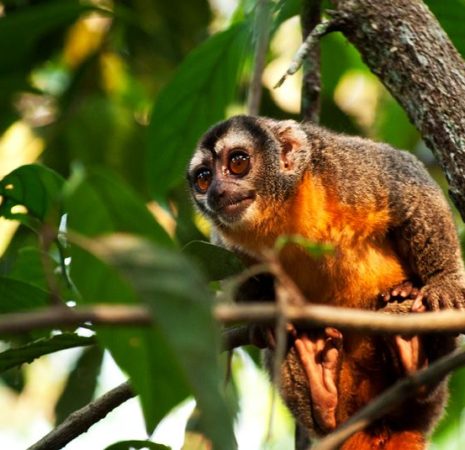 The Amacayacu National Park, in the Southern Colombian Amazon plays a critical role in biodiversity protection. Home to 154 species of mammals, 468 birds, nine species of monkey and many, many plants, this area is under threat from deforestation, hunting and the illegal trade of species. Fundación Entropika has worked tirelessly to revoke permits for capturing night monkeys, as well as working with the indigenous Tikuna communities to find alternative sources of income to lessen the pressure on the forests. In 2010 and 2011 they won the Whitley Gold Award in recognition of their incredible work. Their work at grass-root level with the communities and research is vital to the long-term conservation of this area.

Fundación Entropika are grateful for all donations, no matter how big or small. If you’d like to donate, please click the button below, (please include the project name in the comments).

Fundación Entropika was established in 2007 by a group of conservationists based in Amacayacu National Park in the southern reaches of the Colombian Amazon. Large areas of this forest have been degraded to some degree by the overexploitation of natural resources, threatening biodiversity, as well as the traditional societies relying on the forest to obtain their livelihoods. The charity aims to contribute to the long-term conservation of tropical biodiversity by facilitating local community-led projects, establishing programmes of education and research whilst working closely with the local indigenous people to tackle conservation issues.

The Amacayacu National Park consists of 294,000 hectares, up to 500,000 hectares including the buffer zone, which is made up of private reserves and the Calderon river basin, part of which currently still lacks protection. Due to its geographical location, the Southern Colombian Amazon plays a critical role in biodiversity protection and connectivity between Colombia, Peru and Brazil, and the area is overlapped by indigenous territories.

The Amazon basin is the largest continuous tropical forest on earth and encompasses about 7 million square kilometres, inhabited by a unique mixture of indigenous cultures. Amazonia is also home to over one-third of the Earth’s known species, and as such is one of the most critical reservoirs of biodiversity on the planet.

150 terrestrial mammal species
4 aquatic mammal species
468 bird species
9 species of monkeys including the Night Monkey, the only nocturnal primate in the neotropics, and the Woolly Monkey.

Tikuna, Cocama and Yagua are the main indigenous populations who live in and around the Amacayacu National Park.

Earlier Tikunas were well known as nomadic hunters and gatherers, they started in the area north of the Amazon River but gradually after other tribes were weakened through illnesses brought by missionaries, they started to occupy the river area and became known as expert fishermen and hunters. They started to get involved in extractive industries at the start of the 20th century and as a result of this, along with the loss of cultural beliefs and taboos, there has been a clear disruption between Tikuna people and their traditional relationship with nature. As a consequence, the Tikuna people’s view of conservation projects has been affected, hindering recent attempts towards cooperation with governmental and non-governmental organisations regarding management and use of natural resources. Their economy relies mainly on land cultivation based on small slash-and-burn patches, fishing, gathering, and some tourism.

There are three Tikuna communities which overlap the Park’s territory (Mocagua, Palmeras and San Martin).

Local involvement in monitoring is crucial to empower and enable local people to make sustainable decisions regarding the use of resources. In 2006 work started on a participatory management plan to regulate the use of resources in the Park. However the Tikuna communities do not agree with the Colombian legislation where commercial extraction of resources is illegal inside protected areas; so this is a big obstacle for the protection of this area and solutions are still needed.

Results regarding the sustainability of hunting suggested that six out of the 10 most overharvested game species (amongst these are Agouti Paca, the Mazama Deer, Howler Monkey and Woolly Monkey) present an eminent risk of local extinction. These species are the main source of protein for indigenous people and represent an important economic income.

Illegal trade in night monkeys for the malaria research market is affecting wild populations of Peru and Colombia. Continuous release of Peruvian and Brazilian Nancy Ma´s night monkeys (Aotus nancymaae) into Colombian territory after having been used in malaria research has caused the establishment of an invasive species in the buffer zone of the Amacayacu National Park.

Inadequate education and lack of access to new technologies is reflected in the inability of local people to integrate to the global market and to reach basic education standards.

The lack of law enforcement and the corruption of environmental authorities have caused these authorities to neglect the trade of wildlife and timber in the tri-border area.

Extreme fluctuations in the levels of the Amazon River have resulted in a succession of devastating floods and droughts, drastically affecting local livelihoods and creating a sanitary crisis.

Entropika’s Aotus Project won the Whitley Gold Award in 2010 and in 2011, for continuing the community based-research in the Colombian-Peruvian border area.

In July 2012, Fundación Entropika was instrumental in helping ensure that the permit granted to FIDIC biomedical laboratory for capturing night monkeys for the elaboration of a malaria vaccine was revoked. This measure stops the legal and illegal trade of more than 3000 monkeys by 2015, as well as saving around 20,000 mature trees which would have been cut down to capture the monkeys.

Entropika has helped implement creative and sustainable economic alternatives: training in the elaboration of essential oils, soap and shampoo, made from sustainably extracted forest products, in 3 Colombian communities focusing on vulnerable groups such as women and elders.

The Living Rainforest have had links with Entropika for many years, and have previously hosted an event with them exploring the convergence of local indigenous knowledge and western scientific knowledge to conserve the Colombian Amazon.

Some of the species from the Amazon rainforests in Colombia which you can see at the Living Rainforest include the curious Pygmy marmosets (Cebuella pygmaea), and the well camouflaged Two-toed sloth (Choloepus didactylus).