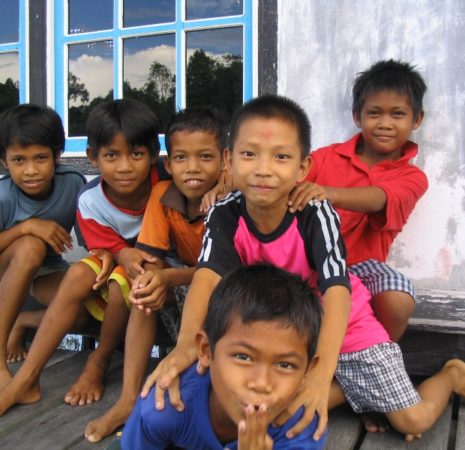 An Indonesian NGO based in Borneo, Riak Bumi is committed to the conservation of the Danau Sentarum National Park, declared a Ramsar Wetland of International Importance, by working with the communities who live in and around it. It has one of the largest remaining populations of Orangutan, as well as many threatened bird, fish and plant species.

Increasing population, overfishing, and palm oil plantations are just a few of the reasons that these unique flooded forests are endangered. Riak Bumi have trained local people to sustainably process the honey from wild bees, which has now been certified organic and is helping to provide an important alternative income for the area. As a small organisation support is crucial to help them to grow, this will help more people to find a sustainable income and help protect this incredibly rich and unique and environment.

By making a donation to Riak Bumi you could help transform lives and protect a unique ecosytem. All donations made on our website are passed on to Riak Bumi in full, including Gift Aid, (please include the project name in the comments).

Riak Bumi is an Indonesian community-based natural resource management NGO based in West Kalimantan, Borneo, Indonesia. It was founded in September 2000 by people from the Danau Sentarum area who were committed to countering trends that marginalize rural and indigenous communities and disrupt the balance of healthy ecosystems. Riak Bumi believe that the only way to achieve both conservation and community welfare is through the empowerment of local people. They work in the communities living within and around the Danau Sentarum National Park (DSNP), an area of 132,000 hectares, located in the floodplain of the upper Kapuas River in West Kalimantan province.

The DSNP consists of a series of interconnected seasonal lakes (danau), interspersed with swamp forest, peat swamp forest, and dry lowland forest on isolated hills. In April 1994, Danau Sentarum was declared Indonesia’s second Ramsar Wetland of International Importance, drawing global attention to this unique area. In 1999, its status was upgraded to National Park (Taman Nasional) and a 65,000-hectare buffer zone was included.

These flooded forests are a unique wetland ecosystem internationally recognised under the Ramsar Convention. This area provides a significant water reservoir for the Kapuas River, the longest river in Indonesia which traverses the length of the province.

Up to about 200 years ago, the area was inhabited by various ethnic groups (later collectively known as ‘Dayak’), who cultivated hill rice, and supplemented their diet largely by means of hunting and gathering forest produce and fishing. Islamic Malay culture spread from Sumatra and Malaya to the coastal parts of West Kalimantan and by the late 18th century, it had spread up to the large towns along the Kapuas River, in the vicinity of what is now the Park. Many of the Dayak were gradually converted to Islam and assimilated into the Malay culture. Currently, there are 42 villages located in or immediately adjacent the Park, having a total of about 10,000 inhabitants, of which about 85% are Malay.

During the dry season (June to August) the main income for the communities is fishing in the lakes. During the rainy season (September to April) the focus is on wild honey bees as the wild forest flowers bloom. Communities have recently started to plant rubber trees and would like to increase that activity in the area. Another interest they have is to promote ecotourism in the buffer zone, for visitors to experience the unique Dayak culture where people still live in long houses and have strong traditional beliefs.

The Park and its boundaries are seriously threatened by Palm oil plantations which cause deforestation and contamination of the lakes due to fertilizers and pesticides used. This industry could even impact the organic wild honey bee production which could lose its organic certification if the bees start to take nectar from palm oil flowers with chemicals. Palm oil development is driven by the lucrative global market for cheap vegetable oils found in many supermarket products from margarine to biscuits and cakes. Without knowing it, most of us eat palm oil daily!

Other threats to this area include the impact of a high increase in the local population, forest fires (often caused by fishermen using fires for cooking too close to the forest during the fishing season); depleting fish stocks due to over-fishing; and land conversion for agriculture and settlements.

One of the great success stories for Riak Bumi so far is the success of Wild Bee Honey production from the wild honey bee. By changing harvesting methods to more sustainable means, protecting the bee population and habitat, improving the quality of the product, and cutting out the middlemen, the price has gone up by 90%. In 2007 they obtained the first organic certification for Wild Bee Honey in Indonesia, a fantastic feat. They have set up the community organisation to manage this product and researched their niche market.

Another success story is the women’s handicraft groups, in three villages, where they make woven items and mats. Through the Kalimantan network, they have produced some beautiful handbags which are being sold at www.borneochic.com

Julia Aglionby, Special Adviser to The Living Rainforest, helped set up the DSNP in 1995 and has supported their vital work since then. Julia serves as an important link to the project.

Look out for animals and plants from Indonesia at the Living Rainforest, including the free ranging Rouloul Partridge (Rollulus rouloul).